That’s right! We’ll be in the hospital at midnight tomorrow night to have this baby! I’ve been doing some last minute things that are my typical end of the week/end of the month things, but GEEZ!!!! It is so much harder when you’re carrying around all of this extra weight in the middle of your body.

My feet have even started to swell a little bit this week for the first time, and being on my feet all week have not helped matters. It could be much worse though. I can still wear my wedding rings {except at night} though, which I think is a great accomplishment.

I went to the doctor Thursday {during a tropical storm, apparently}. Seriously….sideways rain is kind of scary in the middle of Pensacola. It was all in the name of 50% off knobs from Hobby Lobby, so I could put them on the armoire. I got soaking wet, but I have knobs in hand and attached.

The doctor’s visit was pretty quick. I went in, got “checked”, and was then given instructions to be induced. I’m seriously ready to get this show on the road. I know having a baby will be tiring, but so is being 39 weeks pregnant. I just want to be able to turn without hurting when looking both ways before turning when driving, and to be able to pick things up, and to be able to sleep on my stomach again…..even if I do have to wake up to feed a baby. I’m clearly not one of those people who just love being pregnant, and I’ve had a pretty easy pregnancy.

I can’t remember exactly how much weight I have gained. I was just ready to get in and out of my last appointment. I think it was along the lines of 26 pounds, which is kind of funny since that is what I dreamed about a while back {except in my dream I gained 26 pounds in two weeks}. 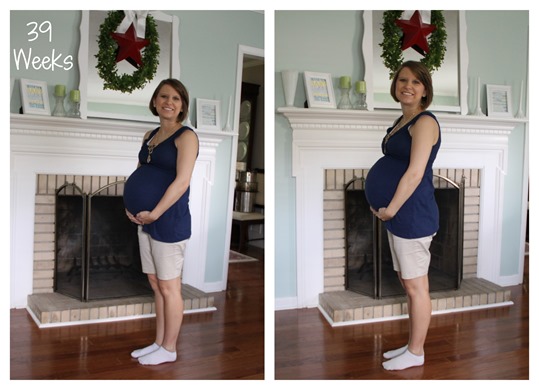 I was still only 1 cm and was about 60% effaced. The kid apparently likes it in there. You’d think it would be the opposite since he has so little room.

The nursery is done minus Colby hanging three picture frames on the wall for me {it’s one of those things that is a two person job}, his changing pad cover coming in, and installing the subway art I made the other day with his birth information on it. Other than that…..done! I still want a rug, but that’s just not going to happen this month.

Pray for me today though! Giving birth makes me kind of nervous {particularly the afterwards part}. I’m excited about meeting our sweet boy though, and I can’t wait to see what he looks like and can finally hold him in my arms. And while I feel pretty confident that I can raise a kid, that’s a pretty big task to fill that I want to do a good job at, even though I know I will never be super mom no matter how bad I want to.

And pray for Colby, too! He’s just as much a part of this as I am, and I’m grateful to have such a terrific guy by my side. He works hard to provide for me {and now this kid}. While others might not notice it, I sure do and feel blessed to have such a caring man to be married to. He’ll be an amazing dad.

Once Colby helps hang the frames, I’ll have a nursery post! I know….I know. You’re beginning to wonder if there even is a nursery! I promise there is! I just want it to be as close to done as it can be. Hang in there! I will post eventually!

Posted by Brenna Langham at 3:32 PM