The first thing you may have noticed is my lack of blogging. Really? This is only my fourth post this month….I think.

Then, all of my blog posts only include flowers, one cute dog, fishing, and other outdoorsy things. 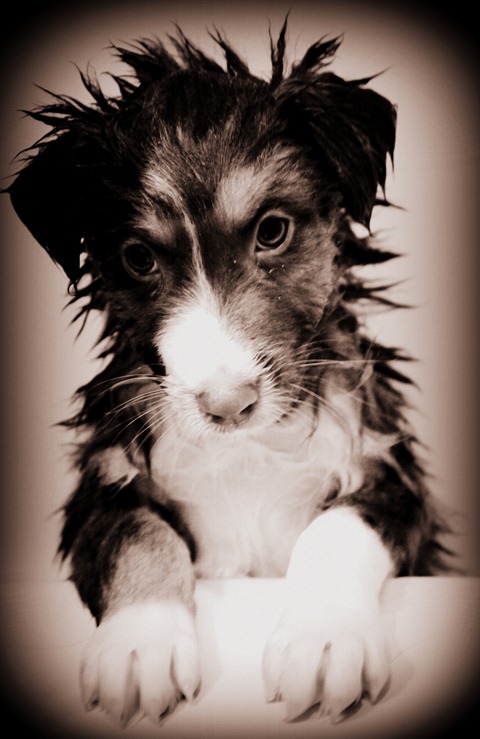 My summer has been taken over by MY LAST SEMESTER OF GRAD SCHOOL! Can I get a ‘Hallelujah!’ or ‘Praise the Lord’???? Geez….I would say that it’s been a long road, but it has really only been a year, which in my opinion is busting it to finish this thing for that small, but helpful pay raise! I probably tell Colby a gazillion times a day that I am absolutely sick of doing school work. That’s sad to say when you’re a school teacher.

In relation to all of this, my comprehensive exam is this Friday! Say what?!?!? So, my entire last year of work is riding on this one test. How unfair is that? That’s the way of the graduate world though, so I must push through. On top of that, my first two chapters to my research proposal are due. Luckily, it isn’t as bad as actually submitting it to a real review board for a real study that is going to be conducted. {Abby, you have my utmost sympathy} 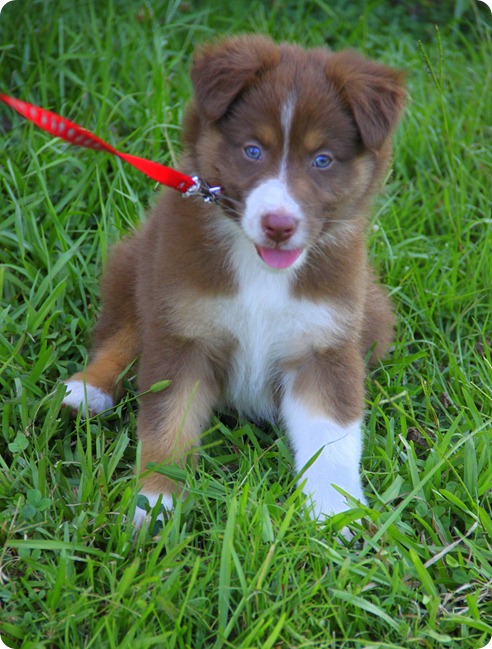 As a result of this taking over my life, I have had no desire to really sit at the computer and share what’s happening in my world. That means I certainly have no desire to do any home projects around here. Trust me, there are plenty. Before long, Colby is going to kill me for bringing in “junk” to fix and make beautiful. Hopefully, after this is all over, I will have some energy to put forth on them.

In the mean time, you’ll just have to deal with more fish and plant photos. Sorry! The family farms are my favorite escape from the world! 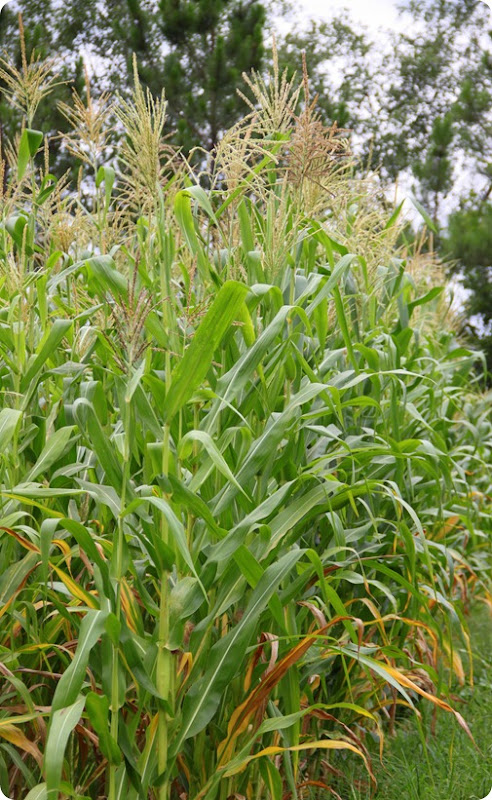 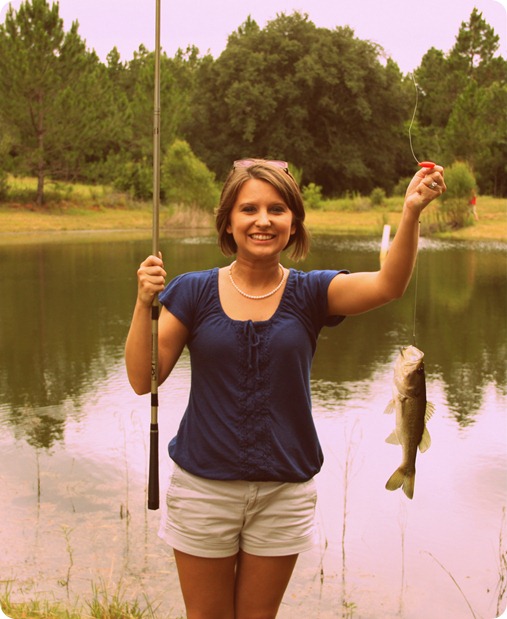 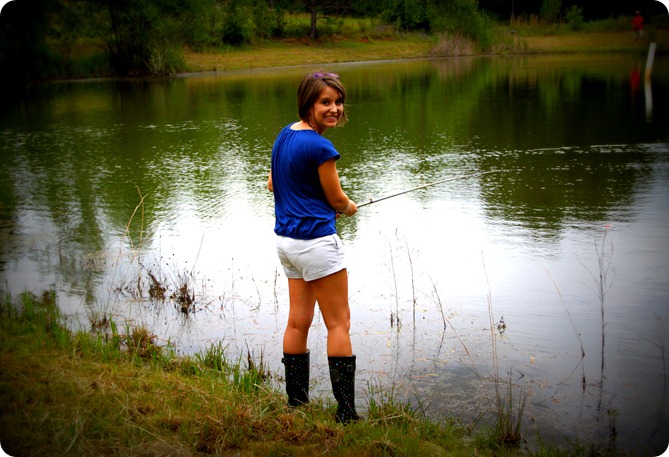 Please ignore my get-up! The boots came in very handy, so I could get closer to the water. It was so mushy around the edge of the pond, and I am the kind of girl that does not want any mud near my feet. Ugh! 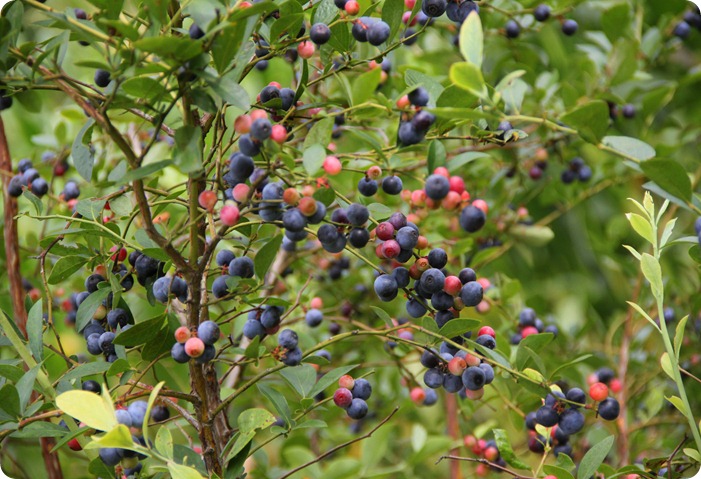 Note to self: Get my butt out there and pick some blueberries! Every person needs a stock of blueberries in the freezer. You never know when you’re going to need them! 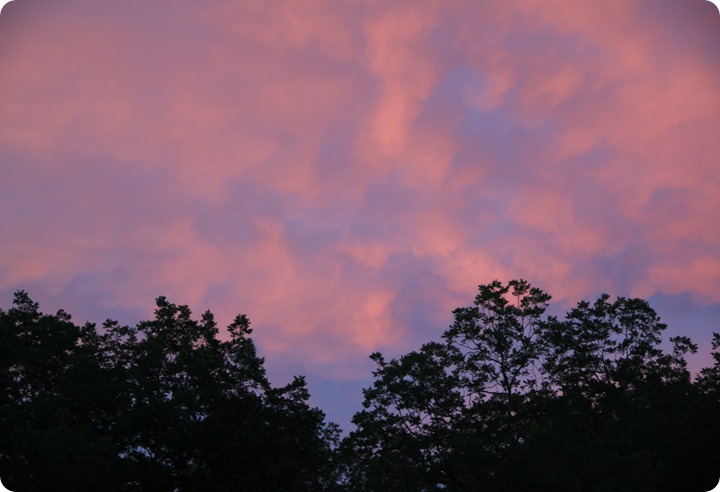 Seriously? Can you end a day with a prettier sky? The photo doesn’t even do it justice either.

Hope you all are getting along alright! Keep enjoying that summer!

He was the main man in my life for twenty-two years, and he is still right at the top of my list. He’s the man who walked me down the aisle to give me away. He held me up when I thought I was going to melt into mush at the last moment all because of one million memories of us that came rushing back before I was going to say “I do”. 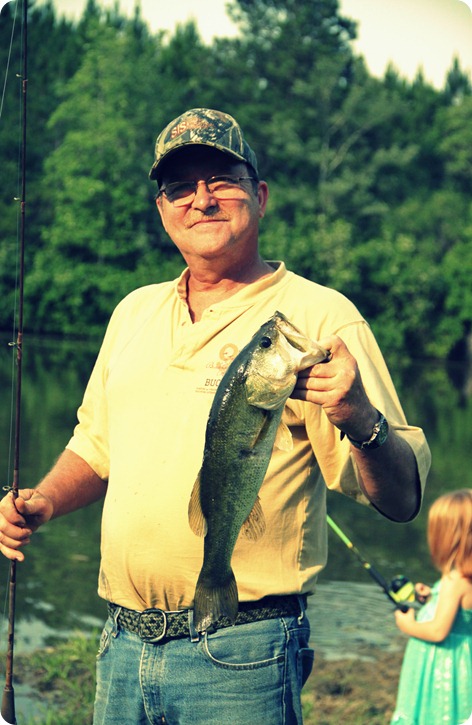 No one can ever take the place of my dad. If you know my dad, you know why I love him so much. He’s one of the most caring and funniest guys I know. I wouldn’t trade our early morning or late night chats to and from work for nothing. It’s always a treat to get his phone call. I don’t know if he will ever realize how much I love him, but it is beyond words.

Posted by Brenna Langham at 2:43 PM No comments:

School is out for summer, and I can’t tell you how much I’m enjoying going to bed whenever I want and waking up whenever I want. It’s what I love about summer break the most. I think the bed gets more and more comfortable each and every day. 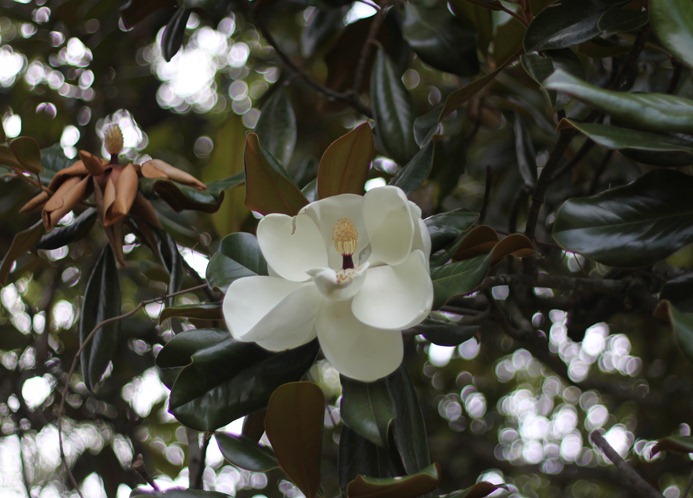 School isn’t technically out for summer completely. I’m finishing up my graduate degree, which is great in theory. In fact, knowing that I should be finished by the end of this semester thrills me. There is nothing I want more than to not open a college textbook again. This process has been hard since I’ve tried to finish everything in a year’s time. If all goes well, then I will have accomplished this goal by July 24th. Hallelujah! Praise the Lord!

In the mean time, put me on the prayer list….seriously. I’m going to need it. I’m overwhelmed at the moment. 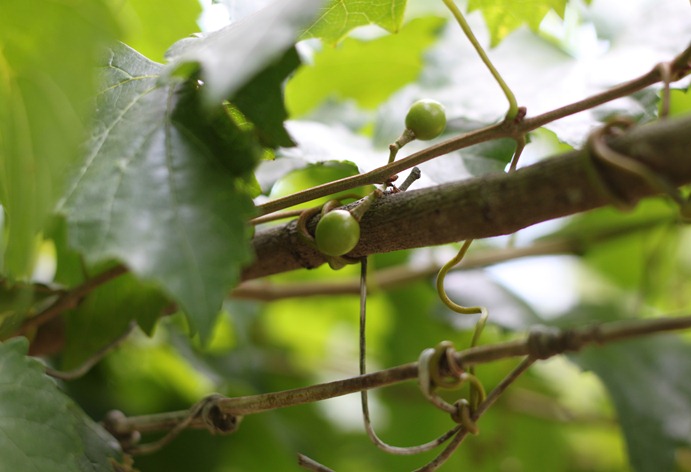 Professional development has been taking place since school has been let out. PD = extra cash. PD = extra stress on grad work. Once again, prayers. I need them. 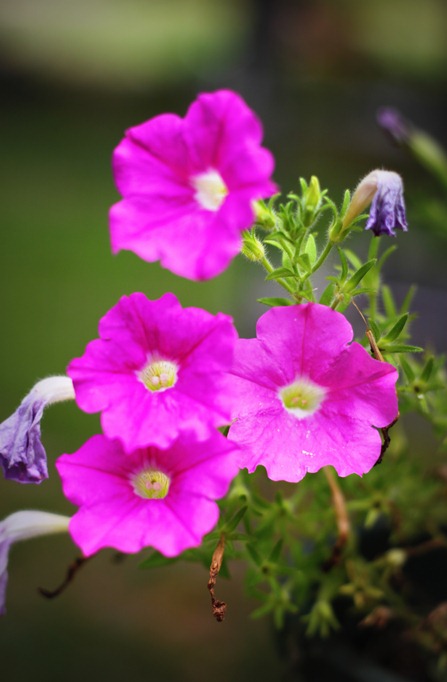 I’m loving the Bachelorette this season. I’m a Bachelorette junky, and I was delighted in knowing that Emily was coming back to be the Bachelorette. I was crushed when her relationship didn’t work with Brad, but I’m glad it didn’t. If it would have, we wouldn’t be enjoying a terrific season with her and all of these fabulous guys. Arie is one of my top picks right now, but I’m sure some others will come into play.

Looks like we’re building a fence for our new little guy. If you haven’t seen him, then you don’t read the blog. Haha! You would think we were having a kid of our very own with how much I’ve been bragging about him. Lord, help this blog when we do decide to have our own kids. 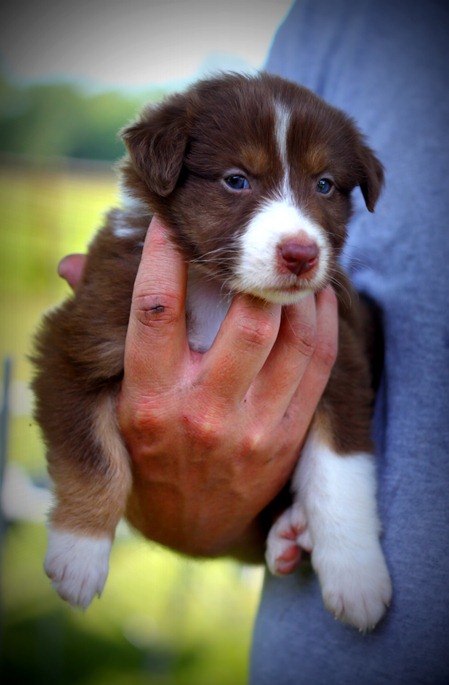 The boys went bowfishing last night and racked up. My BIL shot a 20 pound catfish that was huge! It’s hard for me to believe that I swim in the same river that these guys are hanging out in. Ugh! I’m just glad they keep to themselves and out of sight. That’s the good thing about swimming in a river that isn’t more than knee high during the summer. 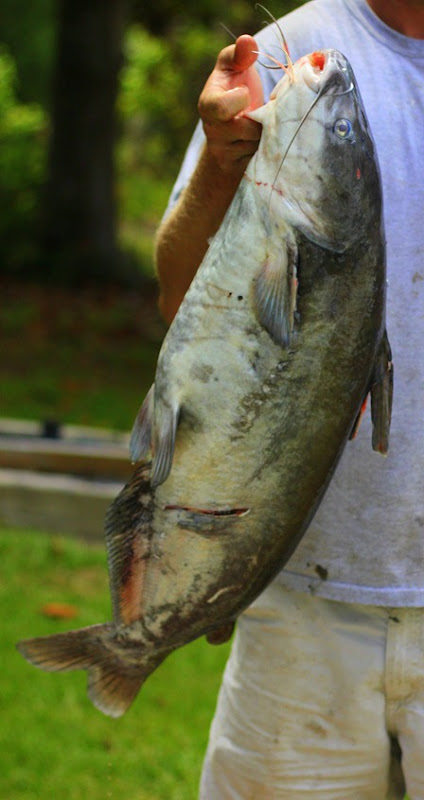 I woke up this morning thinking I had professional development only to get to the school and realize that it wasn’t until tomorrow. Geez! What luck! Clearly, I was a tad bit tired and unorganized in that matter. If you looked at my iPad calendar, you would think the opposite, but somehow those dates got mixed up, and I lost out on several hours of sleep that I could have desperately used after waiting on the boys to get back safely.

Does anyone around the Brewton area know of an upholsterer that can do a decent job? I bought a rocking chair that needs some new fabric and to be re-puffed. I’m trying to pick out some fabric, but I’m going to need someone to do the work. I’ve heard of a company in Mobile, but I’d like to find someone a little closer. Any suggestions out there?

Snickerdoodle cookies from the deli have been my dessert of choice lately. Go get you some and see if you agree!

And….last but not least….Colby and I are on the lookout for some land. We would like something around the Brewton city limits. I’m still up in the air of whether we want to buy or build one day, but we’re just praying that the Lord will provide with the perfect option for us. I know if we put our trust in Him that He will provide, but I’m not going to lie and say that it’s easy to just stand back and wait things out.

So, that’s my ten things! What’s going on with you?

We’ve been given another opportunity to see our new member of the family, and I was so excited that they were big enough to have out in the yard and play with. This really gave me the chance to get some great photos of the little guy!

We still haven’t officially named him yet, but we’re getting closer to a final decision. 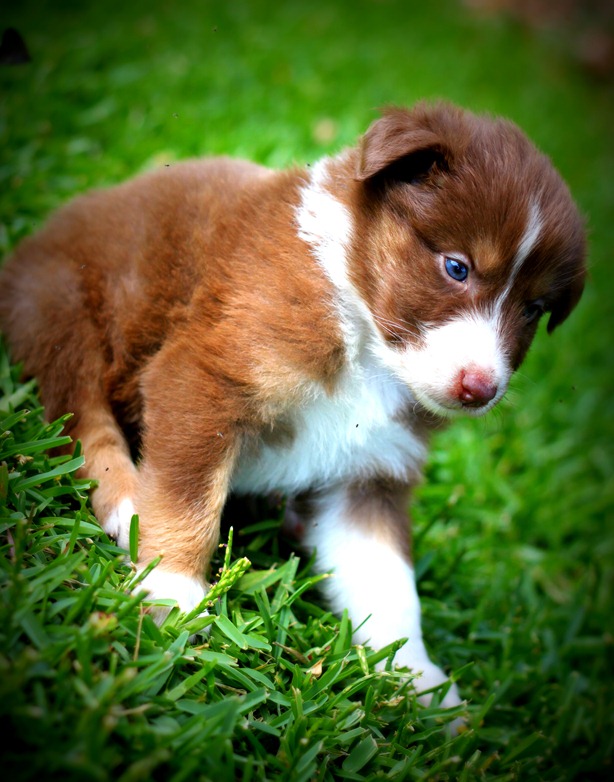 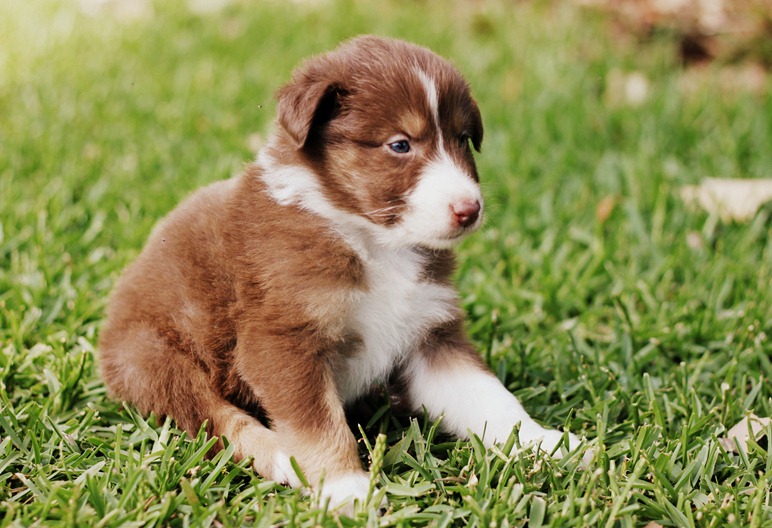 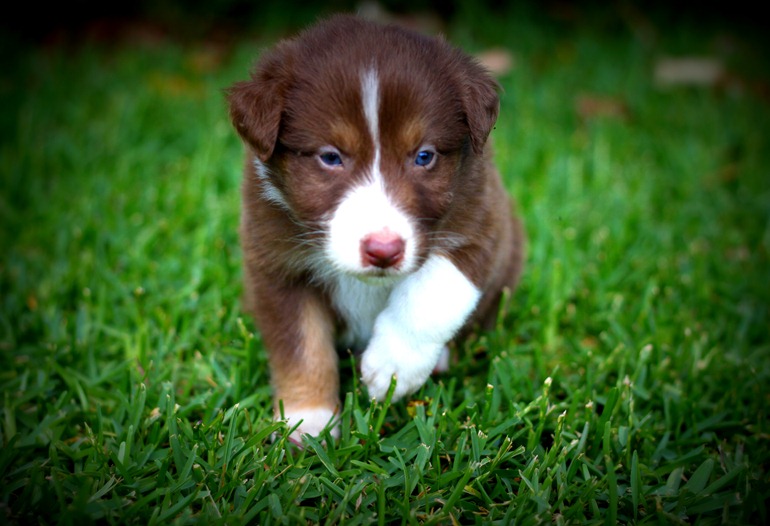 In addition to our little fellow, we had some fun play time with my MIL’s dog, too. She’s getting the brother! 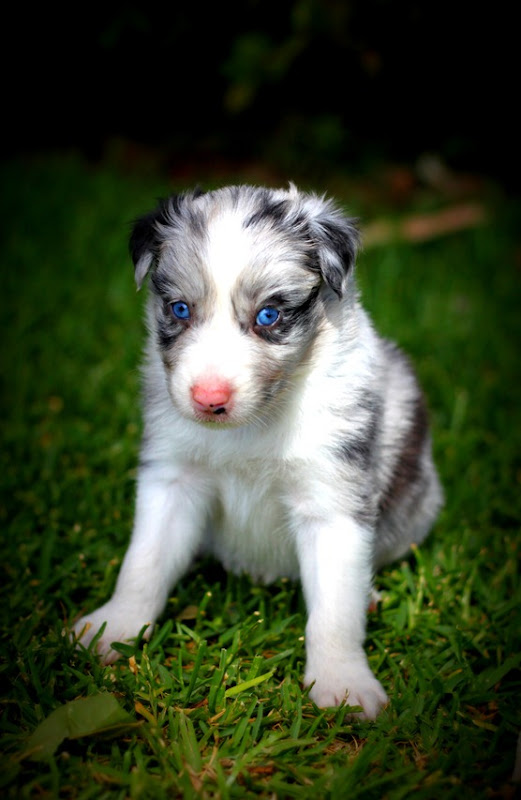 I think it’s funny how these dogs are so different from each other, yet they come from the same litter. 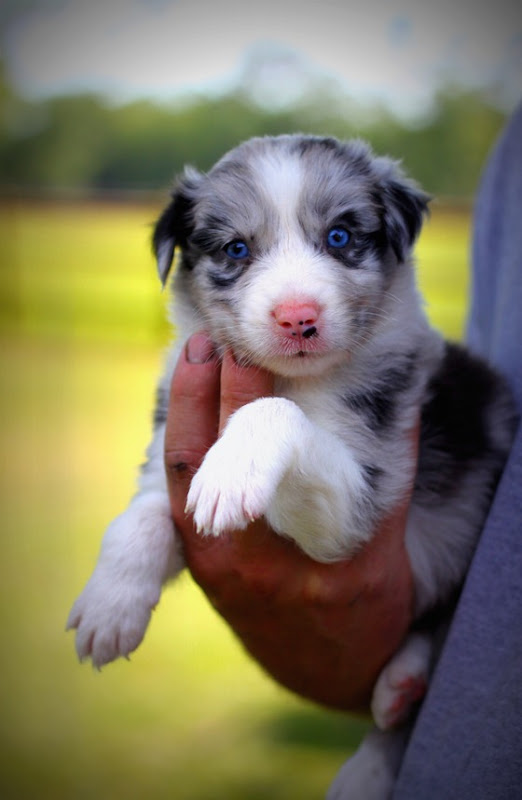 Just a few more weeks, and we’ll have them home! I am beyond excited!

Posted by Brenna Langham at 10:37 AM No comments: