Whew! May has been one crazy month! I never knew that it would be near as busy and as crazy as the beginning of school, but the good news is that I made it through my first year. The even better news is that I’ll be back next year!

I’ve had so much on my mind to blog about, but I have either been too busy or too tired to do it. Apparently though, after reading some other blogs {and their sparse posts}, I’ve found that May is a crazy month for lots of people. It doesn’t help that most of the blogs I read are of other teachers or people who have children.

Now….I have been promising a post about more of the details of the birthday party for quite some time. I finally sorted through all of the pictures and edited them a bit.

For those of you who don’t know {or don’t remember}, my sister and I planned a Candy Shoppe birthday party for my sweet niece since she was celebrating being a whole 3 years old! 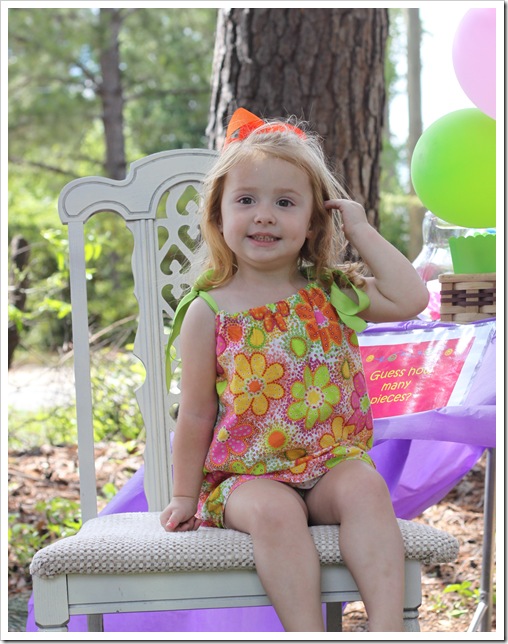 Some of the party plans just didn’t happen due to the crazy wind we had that day. Wind + birthday party decor outside = BIG PROBLEM! Oh, well! Things can’t always run as smoothly as one would like!

So, here are the details of the entire shindig…

We had the tables set with potted flowers and galvanized tins full of different kinds of candy to hold down the tablecloths. 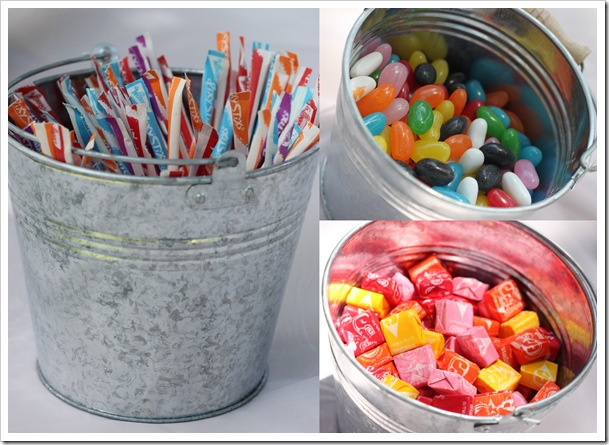 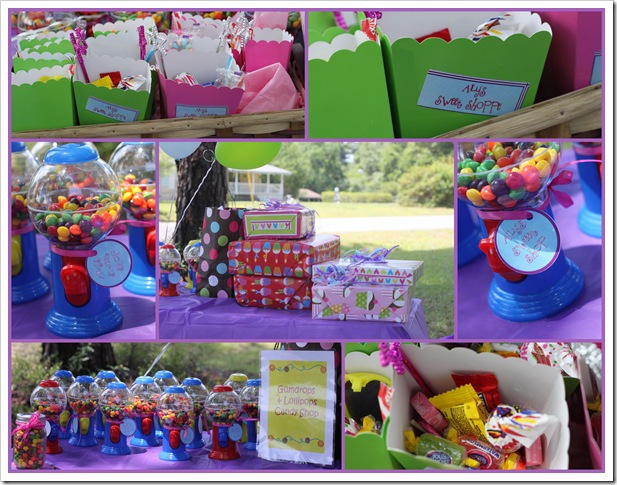 All of the kids took home gum ball machines {found at the Dollar Tree}. Since most of the kids were under the age of 5, gum wasn’t the appropriate choice of candy. Therefore, skittles were chosen instead.

Not only did they receive a gum ball machine, they also took home a box of candy which had a whole variety of choices.

The birthday refreshments were kept very simple since the birthday party started a good bit after lunch. 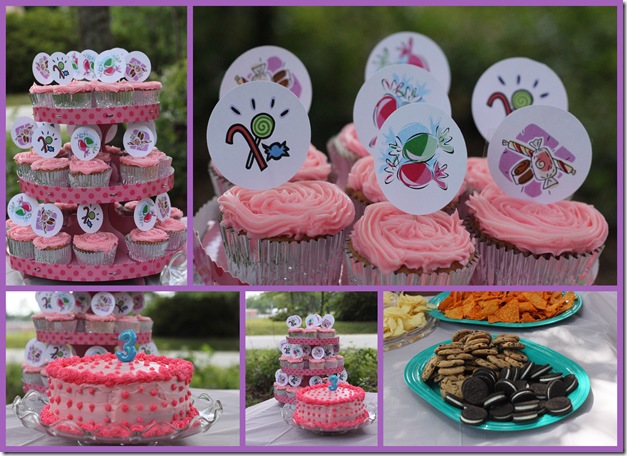 What is better than a game of guessing how many skittles are in the jar?!?! Our winner? Mary, the future mother-in-law of my sister! 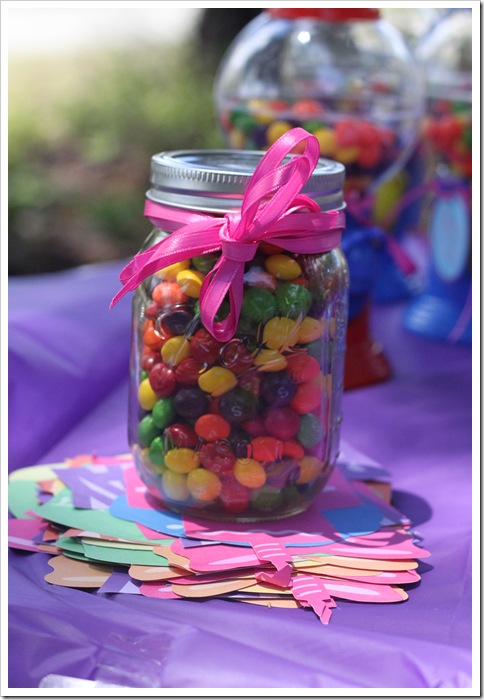 We used die cuts from the Dollar Tree that were in a variety of birthday shapes for the guests to write their name and guess on. 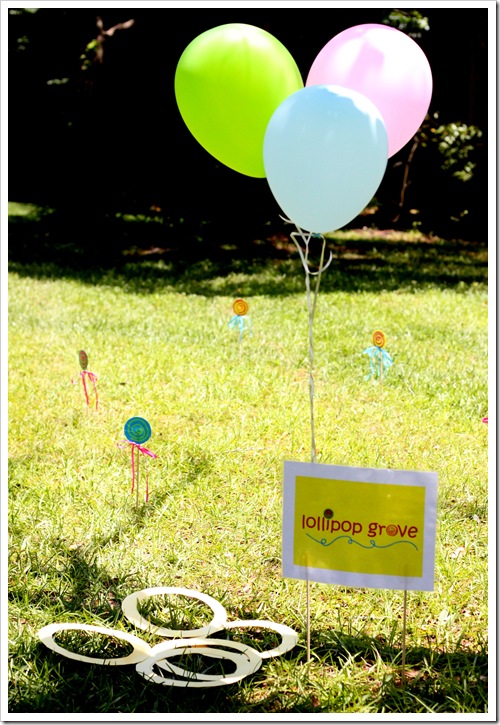 The kids used the rings to throw around the lollipops {or their heads or arms or other useful body parts}. When you have a bunch of 3,4, and 5 year olds running around it is best to just let them go and let them decide how they want to play. They enjoy it better that way I think. 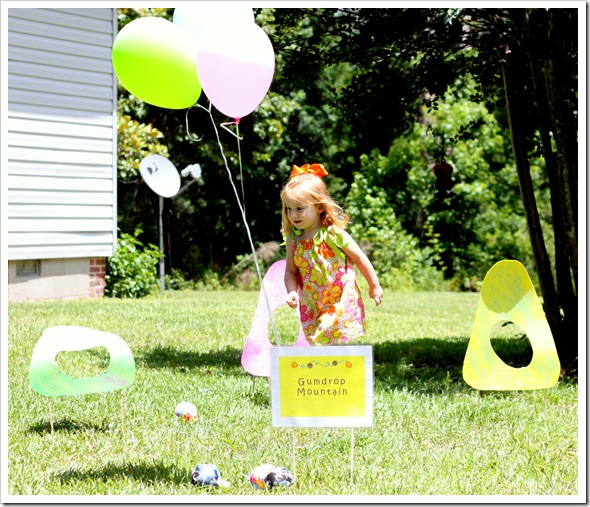 With some poster board, tempera paint, spray glue, craft sticks,  and glitter, we made gum drops that were used to throw balls through. Once again, kids will be kids. Let them have a blast with it {however they choose to play}! 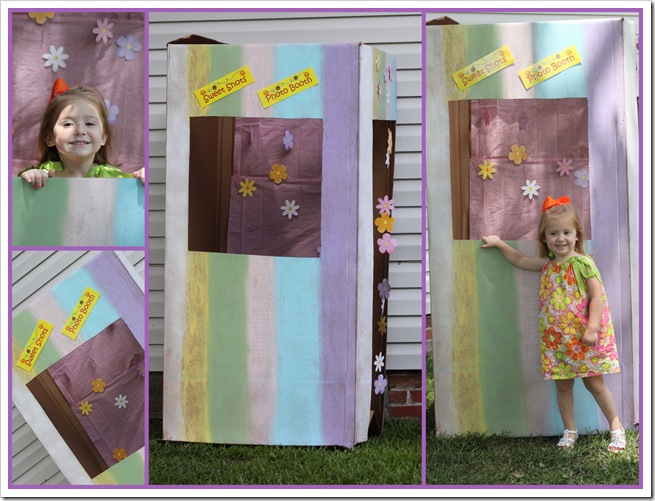 I have to give props to my good friend, Laurie, once again. Ya’ll, the girl came over to my house one evening and spray painted this for me until 8:30 on night. By that time, she was doing it by my one outside light with the wind not in her favor.

Not only was it a photo booth, but it was a restaurant and a house. It was probably more than that with the imaginations I saw. This is a must for this kind of birthday party. Your kids will have a ball!

Aside from everything else at the party, I hung this awesome garland out from a couple of different trees. I found the garland at the Dollar Tree {and I may have stocked up for future uses}.

I had big plans for this garland, but once again that darn wind decided against me and made it where I could only put a couple up until I completely quit fighting it and gave in.

In addition to the garland hanging around, I also hung this canvas that I had Laurie paint for me as well. 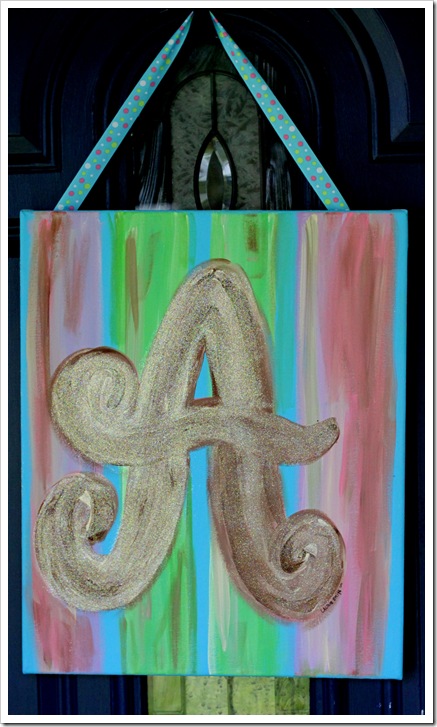 For all of you who are impressed, she’s coming to an etsy shop very soon!

The best part about this piece of decor is that it decorated my door and was also a gift to my dear niece who can now hang it up in her bedroom.

If you would like to view the entire album from the party, you can click on the picture below. 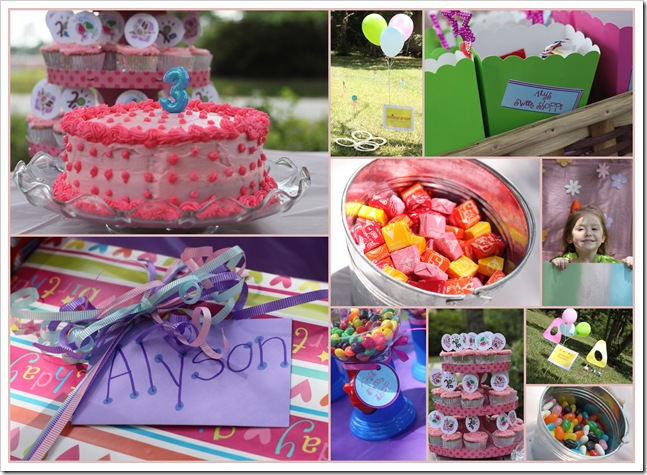 If you would like to use the printables for your own birthday party, click here to go to the website where I found a checklist and the printables.

Hope everyone has a nice Memorial Day weekend!!!

Posted by Brenna Langham at 5:27 PM