Yesterday afternoon, I received some saddening news. My high school principal, Phillip Ellis, passed away after a difficult battle with cancer. 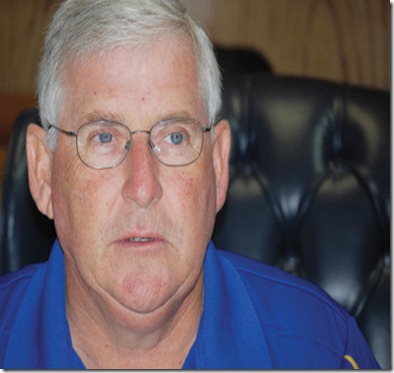 To be quite honest, I have debated on whether to do a blog post on it because I wasn’t sure that I would have the words to portray him as the amazing man he truly was. However, I felt in my heart that I should recognize a man that showed great strength and faith in God.

At our small high school, you get the opportunity to know the administrators, faculty, and staff better than  you would in a larger school. You literally know every single teacher and administrator on much more than a name basis. You get the opportunity to know them personally. After all, it is a small town, and most of the time you know these people outside of school as friends of the family.

Mr. Ellis was a figure in the community that most people knew. He was the agriculture teacher and later became the school’s principal. He was at nearly every event the school had, and his school spirit was clearly known.

A year ago though, he was diagnosed with cancer. However, instead of letting it get him down, he fought courageously against the attacker, and his faith in the Lord shown all around him. His positive attitude was contagious.

He continued to work at the high school even after he had been diagnosed and was going through treatment. Later though, he was transported to Birmingham for more intense treatment and care. After returning home, he was greeted by the community with signs and more love than you can imagine. His determination led him to participate in his final commencement at W.S. Neal High School. I would definitely qualify that as intense love for his school and students.

While we grieve over such a wonderful man, we know in our hearts that he is in a place that we all pray we have the privilege of going one day, to meet our Heavenly Lord.

I pray for this family, as it is always particularly difficult to lose a family member, especially a father and husband. I pray that the Lord will ease their pain. My request to you is to keep this family in your prayers.

Posted by Brenna Langham at 9:10 AM