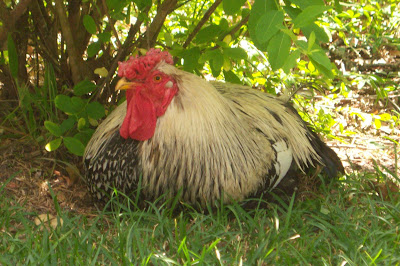 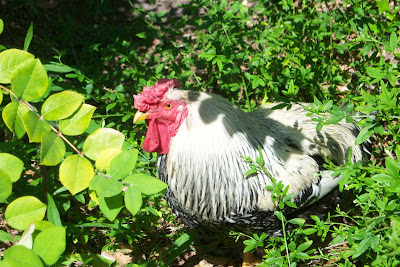 Much to mine and Colby's surprise this past week, we've acquired a new friend
{most certainly not by choice either}.
Somehow a random rooster wondered into our yard.
I, for one, am a little bit scared of it.
Roosters can peck you.
Roosters can spur you.
Roosters can fly at your head.
Roosters can hurt you.
Or, at least those are the crazy thoughts going on in my head.
Generally, all of those thoughts are true.
Not with this bird though.
I can say that I'm more scared of it than it was of me.
I could walk right up to it, and he wouldn't do a thing. This posed a problem when I needed to use the waterhose outside. I had to scare him away with the broom at quite a distance. No worries. The broom did not even touch him.
HERE'S THE PROBLEM WITH THIS HERE ROOSTER:
His clock is off. He wakes everyone up around 4 or 5 in the morning.
He POOPED all over the back step stoop. YUCK!
Good thing for Mr. Rooster that I'm a little tender-hearted!
I HAD to find a way to get rid of him without his poor little life ending.
Luckily, I have a friend who I knew might be interested.
I gave him a call.
He told me there was no way we could just catch him easy.
I explained how he was tame, so to speak.
He came over.
TRY ONE:
Catch him with bare hands.
Fails
TRY TWO:
Catch him with bare hands by throwing a towel over him so spurs wouldn't hurt.
Fails
TRY THREE:
Feed Sock-It-To-Me cake to him until he walks into the cage.
SUCCESS!!!!!
Now he'll have a nice home with Spencer's grandfather and fellow chickens.
So long Rooster!
Posted by Brenna Langham at 5:01 PM