A Big Thank You

Yesterday, I completed one of the biggest tasks I have had yet in this wedding.
Invitations.
There is no way a person could understand unless you've sent out nearly 200 invitations yourself for a wedding.
The good news is though that IT IS DONE!
I did not take the traditional approach to invitations though.
I was on a bit of a budget, and there were other things that took priority above the invitations.
I had already planned on printing the invitations myself, and I was looking for a company on etsy that had an invitation I liked.
There were several I liked, but then my future sister-in-law and brother-in-law suggested the best thing ever. 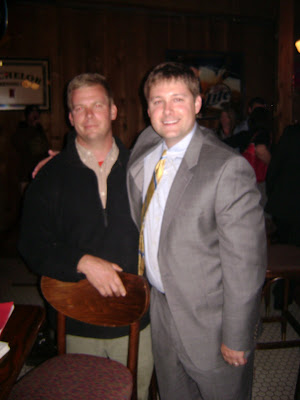 Judd (seen above on the right) offered to design my invitations himself. I didn't doubt his ability for a second. I've seen his work, and it is simply fascinating. He is an incredibly talented person. All I had to do was pick out a design I liked and tell him what I wanted. Then, he compiled it all together to make an incredible invitation.
It didn't stop there though.
All of my thank-you cards, response cards, and programs will also be coordinated with it.
Here's a sample of what it looks like by going to this link. You'll have to look at the first one only. The second one on my computer looks a little messed up on this website. However, if you're interested and would like to see more of his work. I can send you sample files.

Email me to see more.

Note:
His wife will also be doing a blog post on this in the future. I will let you know when she does.
Posted by Brenna Langham at 7:09 PM