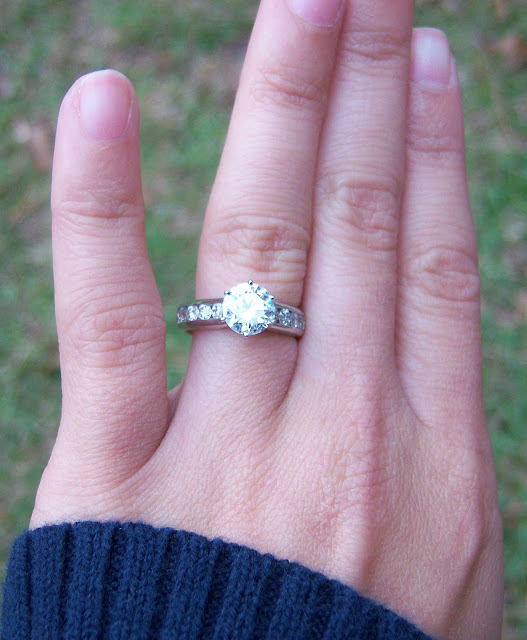 I'm Engaged! I am the future Mrs. Langham!

Now, I'm sure all of you who know me and haven't asked about all of the details would like to know what happened, so I'll just go ahead and share the story with you here.

It was the day before Thanksgiving, and I was not in the mood to get up and go that day. I knew I had a lot to get done, and I didn't have time to waste. I had made myself quite the to-do list.

The day went on just as it normally does. I went to work. I did some end of the semester school work.

Then, I talked to Colby on the phone. He said he was going hunting that day. Typical. Just another day.

"Good luck and be careful!" I said, just as I always do.

I went to his house and ate lunch by myself and went back to work.

When I left work, I knew I had to immediately go to Wal-Mart and get myself a hand mixer to make my Paw Paw's Sweet Potato Pie. This is not your ordinary sweet potato pie. I have to follow the directions he spouted off to me one day to the "t". {For all of you who don't know...my paw paw passed away last year. This was his signature recipe.}

I went to Wal-Mart, got the mixer quickly, and left to go back to the house. I knew it would take me awhile to make the pies up, so I just threw a frozen pasta meal in the skillet. Easy, peasy. It tastes good, and it's quick. No fail supper.

Six o'clock rolled around. I knew it was time for Colby to be giving me a call to let me know he was on his way to the house. I worry myself to death about this because a man recently fell out of a tree stand and died.

Six o'clock came and went. Before I knew it, it was 6:30. I texted him. No response. Boy, was I getting worried! I tried beeping him on his phone constantly. No service. Oh no! Something terrible must have happened to him! Maybe if I give him a little more time, he will call me. Surely he's okay. Then, I heard my phone. It was him. Whew! He was on his way home.

I was busily making my pies and putting some in the oven. The dishwasher was going. I almost had the house cleaned up. I was knocking things out left and right. Colby came in and was very quiet. He scared me to death when he came in the kitchen because I had no idea he was home. He kissed me a few times and told me he was going to take a shower. I told him okay, supper was on the stove.

I was still in the kitchen when he came out of the shower. He went to his bedroom. I thought I heard him call my name, but then I thought he was just talking on the phone. Nope...he was definitely calling my name. I just assumed he wanted me to pop his back {he lays on the floor, and I push my hands upward on his spine}. This is nothing out of the ordinary. I do this everyday just about.

When I got in there though, some words came out of his mouth that can mean one of two things. Good news or bad news. Apparently, I'm a pessimist because I immediately thought it was something bad.

Crap. What could it be? Things have been going great. I guess I'll just see.

"I've been thinking a lot about you today. I wrote you a letter."

Hmmm...a letter. It must not be anything bad. He never writes me letters. This is pretty sweet.

Will you marry me?

He gets down on one knee, asks me to marry him, and of course I said yes.


Since everyone knows Colby and I, you know that I have been waiting quite a long time for this. He had a difficult time finding a way to catch me off guard when I wouldn't be expecting it. He succeeded.

I love him very much, and I couldn't be happier with him. He is an amazing man who surprises me everyday.

And yes...the picture up top is the picture of my ring, which I believe he did a fabulous job picking out...on his own might I add.
Posted by Brenna Langham at 4:45 PM