Ya’ll, it has been two weeks since I’ve blogged. I haven’t fallen off of the face of the earth, but I sure haven’t had the time or the energy to muster up a post. To be quite honest, there hasn’t been too much happening other than just life in general. School gets busy this time of year with tons of activities for the kids. You know the ones I’m talking about…..Christmas play practice, Thanksgiving dinner with parents, Santa pictures, etc. With all of those things going on, it puts us in a hurry to make sure we get everything in.

This week I have been enjoying a break from all of the craziness, but it will start right back up again next week. While rest is what most everyone would do on their week off, I have been tackling some home projects that have been screaming to be done {or re-done} in this case. I’ve also been on edge for the past week. A rather large {in my opinion, of course}  lizard got into my house somehow. I swear I wish I knew how he got in, so I could put a stop to that. Anyhow, I’m terrified of lizards or any kind of insect or reptile. Ugh. They just gross me out.

After he continually caught me off guard by appearing in various places in my laundry room and bathroom, I decided enough was enough. Every time I would go into the laundry room, I would be stepping carefully and looking everywhere to spot him. Then, no matter how hard I was looking, he would still pop out, and I would scream and run the other way. It was a sad cycle that I have no idea why I’m admitting to. Of course, I got to hear everyone say that they won’t hurt me and that they eat bugs {as if I didn’t know that}, but that doesn’t do anything about the fact that I still hate them.  In response to the sneaky lizard, I spotted him and hopped up onto our freezer that is in our laundry room. I tried my best to scare the dickens out of him with a broom. To no avail though, he was still in there and still alive and well. Knowing I had to get ready to go eat, I bravely entered by bathroom to touch up my makeup. I keep all of my makeup and hair supplies in a basket. The shower curtain had gotten tucked under something and was stuck in it just a little bit. As I was carefully loosening it being fully aware that the lizard was probably going to pop out, I looked up and there it was on the shower curtain. Needless to say, I threw the basket, and everything went everywhere. Colby finally came home, and I sent him in to assess the situation. No lizard. As he was brushing his teeth though, he spotted him….hanging from the light fixture!!! Thinking that Colby was going to chase me with him or tease me with it, I ran out into the yard until I saw him throw him out. The neighbor kids probably thought I had finally lost my mind. The good news is that I’m not longer on high alert while walking through my house.

Anyhow…this post got way off base. I guess it’s what happens when you haven’t posted in two weeks.

Even though Thanksgiving dinner is not at my house, I still wanted to set the table and share it with you in case you were looking for a budget friendly option for setting your table.

To start off, I set the mood by hanging this bunting on my china cabinet. I used a printable bunting template from BusyGirl. Super easy! All you have to do is print, cut, and attach with some kind of ribbon or string. I used twine, and it worked for me. 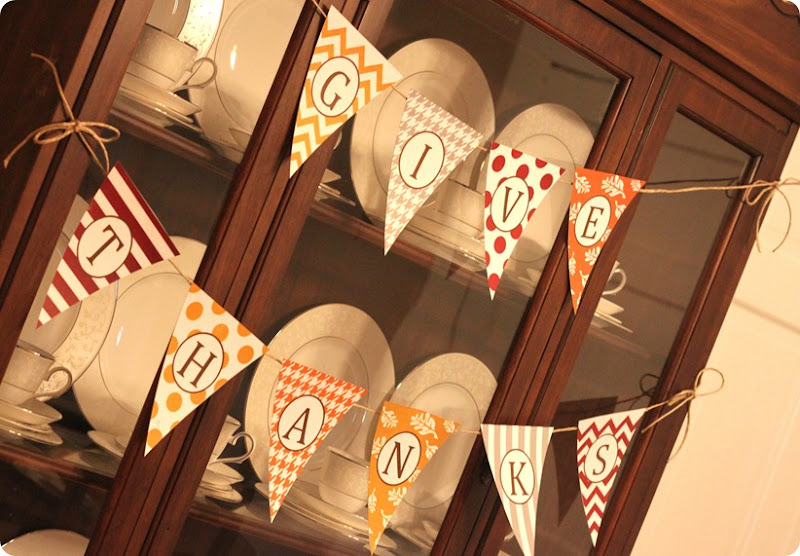 Then, I moved on to the table.

For the centerpiece, I used a burlap runner that I made myself. My tip to you is to use a runner that you already have and use it as a template to cut out a runner from burlap. You will want to make it just a tad bit wider if you are planning on using some hem tape to press it down to make a nice, clean line. I also used three pumpkins {one I picked up in Tennessee on our trip and the other two were given to me from another wedding I was in….thanks, Erin}. The greenery is made up of cedar tree greenery and fresh pine needles. I just kept tucking it in until it was nice and full.

I then tucked in some pine cones, and some of them held another printable that came from Bird’s Party Blog. 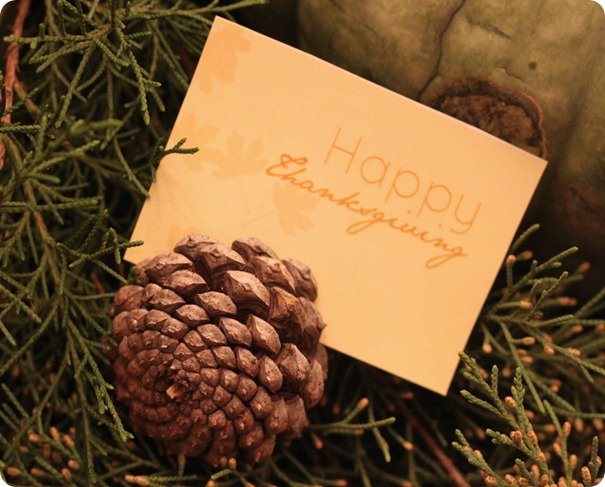 For the place settings, I chose to use a set of dishes that my mom was trying to get rid of in yard sale. When she offered them to me for no charge at all, I hopped on them with the intent of using them during the fall. 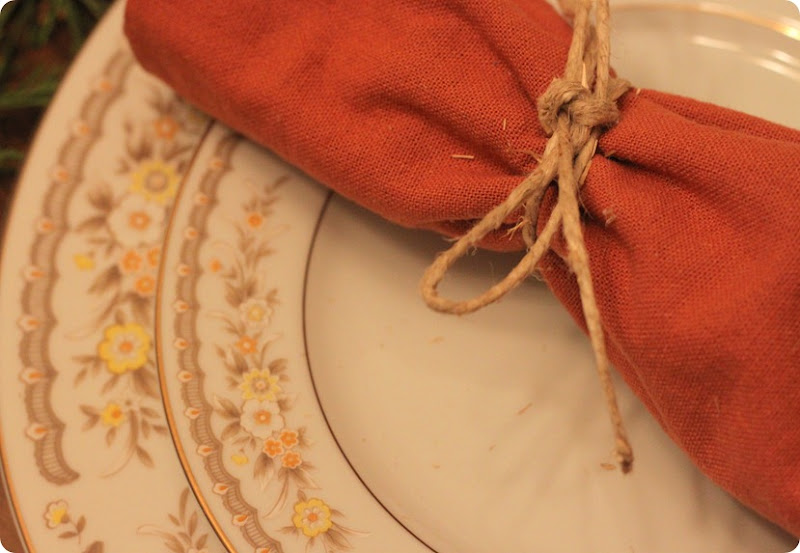 The napkins are just plain orange ones that I picked up on the clearance aisle once that are tied up with twine with the utensils tucked inside.

To add in a personal touch to the guests, I attached this printable from Simple As That. They are actually supposed to be toothpick flags, but why use them for their intended purpose?

On the front, it has a Thanksgiving word or print, and on the back you can write the guest’s name. 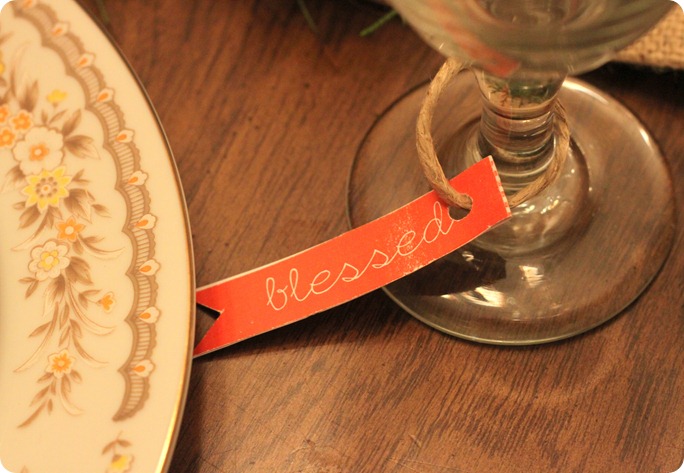 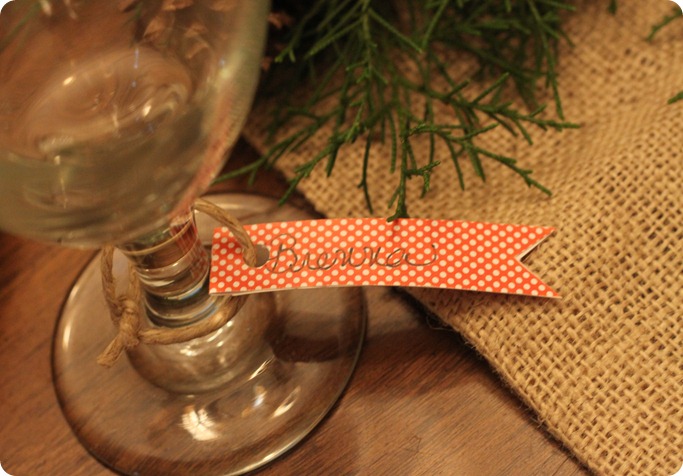 So that’s my Thanksgiving inspired table! I hope you all have a blessed Thanksgiving. Count your blessings and be thankful for all of the things big or small that God has provided you with this past year. Spend time with your family, and don’t let this Black Friday that is slowly creeping into our Thanksgiving festivities fiasco interrupt the true reason that this holiday is celebrated.

My Family to Yours

Posted by Brenna Langham at 9:33 AM