Today’s post is a summary of day two of our trip. This was actually written on the morning of day three, but I refrained from posting it due to any crazies out there who might take advantage of us going out of town. 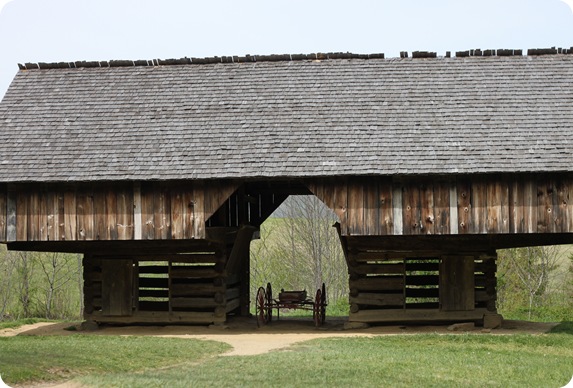 We spent the better part of yesterday in Cades Cove again. It seriously does not get any more relaxing than being with nature and just observing the beauty God has created for our enjoyment. 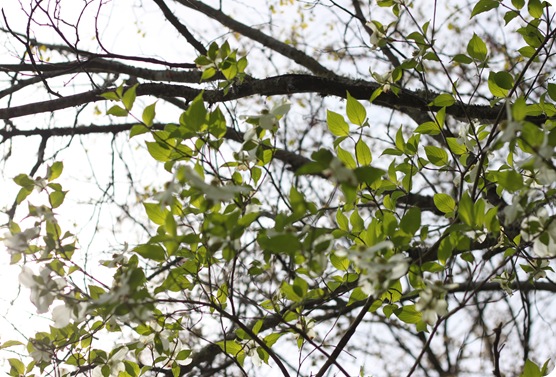 I have never been to the Smokies during the spring time, and I must say that it seems that our spring in Alabama came much sooner than theirs. Everything seems to just now be blooming.

We were a little disappointed in the amount of wildlife we had been seeing during the day. It was few and far between. 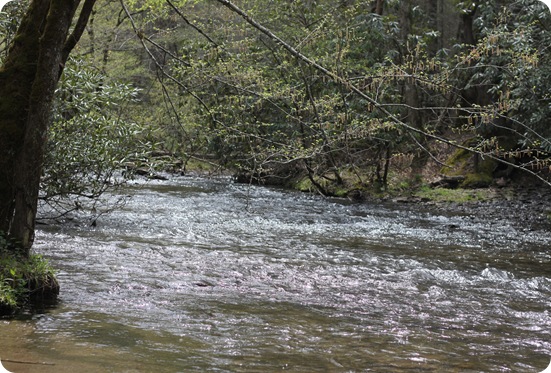 When it was time for lunch though, we decided to go down to the creek and have a picnic {on my 101 list}. 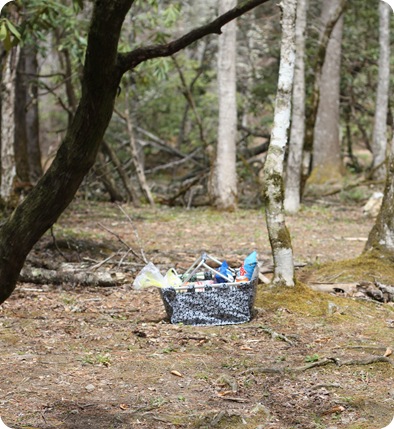 We brought a quilt, but Colby had to go back to the car to retrieve it when I took this picture. I love picnics though, and I wish I could do it more often. 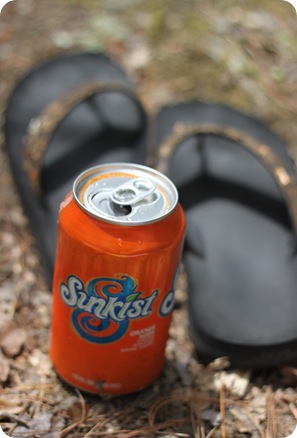 Because we weren’t sure when the bad weather was going to start rolling in, we opted out of the hike we planned on taking. I feared being on the middle of the hike and the bottom fall out. A chance of a long hike back in a thunderstorm on a mountain = Brenna doesn’t hike.

Instead, we decided we would go horseback riding. Colby had never been, and I’ve done the ride through Cades Cove. This led us to a stable my mom told us about. 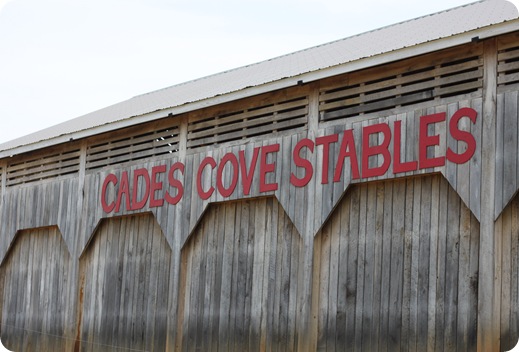 Colby was given “Gunsmoke,” and I was given “Cinderella.” Now, one might think that Gunsmoke would be a horse that might be trouble, and Cinderella would be the horse that was sweet and loving. BUT, one couldn’t be more wrong. 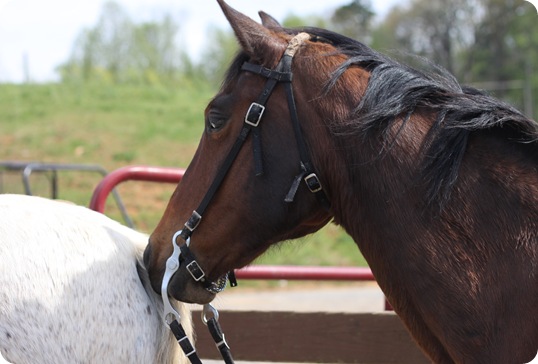 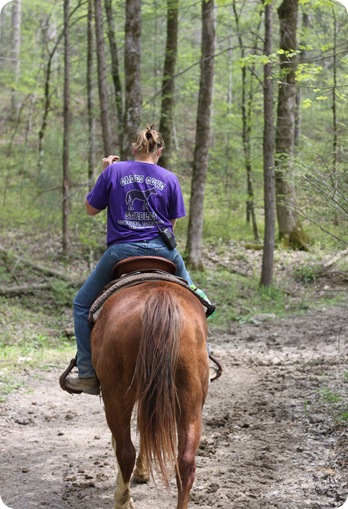 Meet our guide {whose name I forgot after “the incident”}

I could tell immediately that my horse had a mind of her own. She constantly wanted to take a break to eat {as in every two feet} which meant I had to constantly pull on the rein a bit to hold her back. She also liked to walk to the edge {which makes one a bit uneasy if you’re not accustomed to horses on a mountain}.

Colby’s horse on the other hand seemed to do pretty well except for the fact that he would run in to my horse since mine was so slow and wanted to stop on occasion. 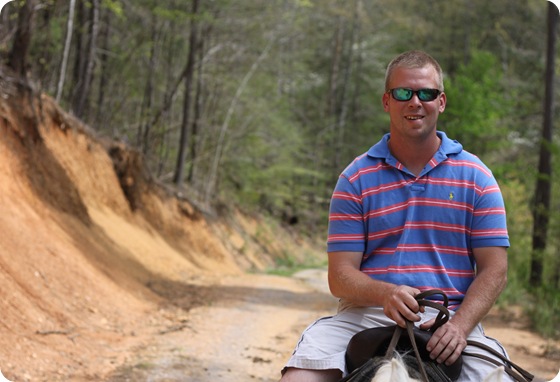 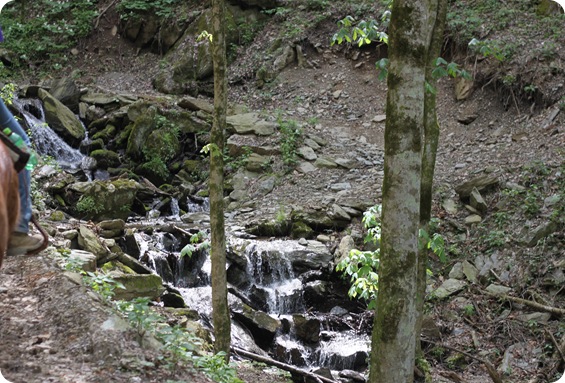 I started to worry when I saw this ahead. I wondered where we could go from here. Surely we weren’t about to turn around?

Oh no! We crossed that stream, made that sharp turn, and we saw this…. 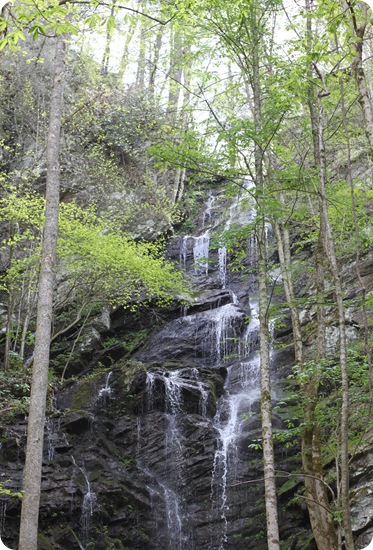 It was truly stunning! And there we were standing in it!

Then, it took a turn for the worse. Colby’s horse got a little too close to mine one too many times and while we were going down the mountain she decided she had had enough. She stopped and kicked those two back legs at Colby’s horse. She nailed him right in the chest, too.

I had no idea what had just happened. I just new that my adrenaline had kicked in and that I was scared to death about what was about to go down. Of course, my head was giving me the worst possible scenarios in all of five seconds of the worst that could happen. You know…throw me off, take off running down the mountain with me on it, throw me off and down the mountain, start bucking around.

All I knew to do though was to hold on for dear life and try to stay on. And that I did. I couldn’t get back to the stable quick enough after that. We ended up switching the horses around though after that incident. 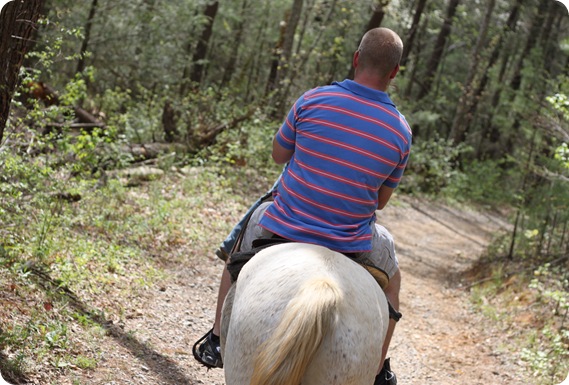 We were good sports about it though. What else could you do? After all, they’re animals and no matter how much they are trained they still have a mind of their own. I just wish she wouldn’t have decided to have a mind of her own on that steep hill down with me on it.

All is good though!

We went back to Cades Cove right at dusk to try to see more wildlife, and we did see more deer. The storms moved in late last night, and it is supposed to shower some today, but we will see!

Posted by Brenna Langham at 6:00 AM