I thought long and hard about house goals for this upcoming year. 2012 was such an amazing year that it would be very hard for 2013 to top it. However, I didn’t expect 2012 to be such an outstanding year either. The Lord has definitely blessed us in the past year, and without him we would not be in the place we are now. In an effort to build upon that, I have set us some goals once again for our house. Last year, we did achieve some goals from the list, but not many. This year I wanted to make some more attainable goals.

So let me share some ideas for the upcoming year….. 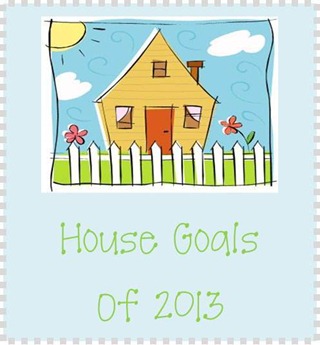 Get seating for the living room

Get lamps for the guest bedroom

Paint built in cabinets in den

Buy one large rug for the house

Remove vertical blinds in bathroom and replace with curtains

Have one piece of art framed and hung

Have carpet replaced in guest bedroom

There are some pretty expensive goals on the list, but some are already in the works as we speak. They just haven’t been put into complete action yet. I’m excited about crossing these things off of the list. If I mark half off of the list, I think that would be satisfactory.

Posted by Brenna Langham at 3:47 PM