This past week was crunch week in preparing for Landry’s 1st birthday. We went with a picnic theme. I figured we might as well keep the gingham theme going for this year.

I wanted it to be nice and cute, of course. I’ve tried not to go TOO over the top since he’s really not going to remember it or understand what’s going on. You all know I like to throw a good party though. It’s been difficult to reign things in a bit from what I really could have done.

No worries though. It won’t disappoint I don’t think. Let’s hope anyway.

In preparation, I made a banner to go on his high chair. It was a bit time consuming, and looking back I probably could have made things a LOT simpler, but hindsight is 20/20. 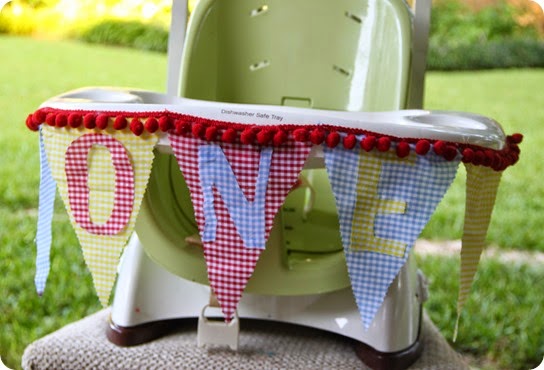 To make it, I gathered three colors of gingham fabric, pom pom trim, a needle and thread, pinking shears, and hem tape.

I measured the width of the area I was wanting to cover around the high chair and cut that amount off of the pom pom trim.

I then decided how wide I wanted my pennants and pretty much just eyeballed a pattern for the pennants. I traced {lightly} onto the fabric and cut them out with pinking shears.

After I had them all cut out, I laid them out across the pom pom trim just as I wanted them.

This is where I probably could have saved some time. I stitched each pennant {making three small stitches at the beginning, middle, and end….nothing fancy….think sewing a button on}. Truth be told, you probably could have used the hem tape and save tons of time.

After they were all on, I went onto the computer and typed ONE in the size and type font that I felt would look and fit best on the pennants. Printed them. Cut them out. and taped them onto gingham fabric and hoped for the best. THEY ARE NOT PERFECT {but that’s ok with me}. If Santa Claus brings me a Silhouette machine, I won’t ever be in that predicament again.

Once my letters were cut out, I applied them to the pennants with hem tape and an iron.

After reading this, you can see why I rarely do tutorials. I just kind of go for it. I use what I have and try to practice what we preach at school and be resourceful.

To hold it on the high chair, I just used some hot glue. I haven’t detached it yet though. I’ll let you know if that was a good idea or not. Let’s hope for the best.